Theme: No One is Rich Enough to do Without a Neighbor…

Synopsis: After a long day of work where I’ve had many meetings, I’ve spoken on the phone with lots of people, written emails and sent whatsapps to so many, I finally come home. I come in, in silence and in the dark. Loneliness gets to me. In the building in front of me I see a light beam which contains the warmth of humanity. I don’t see anyone, not even a shadow, so I continue to search until I find some silhouettes. I can sense everyday life. We humans tend to have similar routines! Within the distance I can find some closeness. I find myself at peace for a short while, but I must go back in, alone and in the dark. 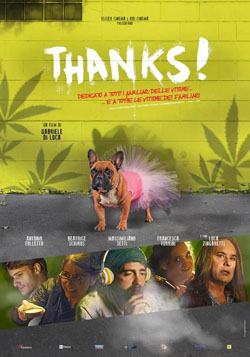 Synopsis: Fil and Charlie (Antonio Folletto and Massimiliano Setti), grow marijuana in the apartment they live in, at the third floor of a rundown building, in the slum of the suburbs of a town in northern Italy. After dealing drugs in the streets for years, they decide to make a definitive change in their careers: the first pot coffeeshop in the middle of the jungle in CostaRica. Suddenly everything gets messed up by the return, after 15 years of absence  the father and ex-husband, who in the meanwhile has become a transgender…